How to Read Chinese Characters
Posted by Julia Song 3771

Chinese characters are known as square-shaped characters because of the size of characters. Most foreigners especially those who come from western countries may feel confused when they see these “pictures”, since so many pictographic scripts exist and pictography is the basic method of Chinese writing and the foundation of Chinese formation. So many strokes that it is easy to make them confused. Actually if you master the basic knowledge of how to write characters, you’ll find that all characters are logical and even interesting!

Usually, a single Chinese character consists of different parts, we call that radicals, different radicals means different, some indicate the meaning of the character, some indicate the sound of the character. For example, the left side of ”明(mínɡ)”is “日(rì)”, which means sun, the right side is “月(yuè)”, which means moon, that’s why ”明(mínɡ)” means bright! Isn’t that interesting? Character “火(huǒ)” means fire in Chinese, the ancient written form of this character looks like a flaming fire! Character ”雨(yǔ)” is the shape of raindrops, the horizontal stroke on the top indicates the sky, and the dots underneath are supposed to be raindrops.

Hanbridge Mandarin’s Chinese character course makes Chinese character reading easy. Here we will teach characters in two parts: strokes and meaning. With hard work and practice, you will be able to recognize 1200 of the most frequently used characters. We will teach you some interesting stories about the origin of each character as well as their development throughout history. Also you will learn and practice the principles of strokes, stroke ordering, formation of characters, and common character radicals. Learn practical characters that are used frequently in your daily life! 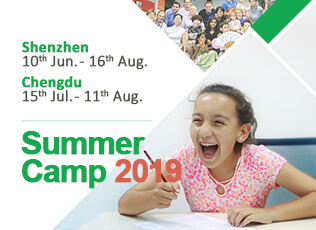